Sola is a shrub of the legume family that grows naturally in the rice paddies of Thailand. When peeling away the sola’s bark, a lustrous pure white stem appears, which is then finely sliced by professionals employing expert techniques. Next, the material is dried and individually crafted into the shape of flower petals. The fine fibers carefully soak up the fragrance’s pigments and components to create a beautiful sola flower.

These fragrance sticks are made from the wooden frames of folding fans and are used with our original perfume diffusers. Made from bamboo with beautiful openwork designs, they add an exotic character to any room. The fibrous bamboo material is fashioned into long straight pieces that act as a capillary absorbing the scented oil and releasing it for a fragrant effect. By carefully selecting a softer areas near the bamboo’s center for this product, we are able to increase absorbing effectiveness and fragrance quality.

This deodorant & purifying component originated in France and consists of an extract created from 8 types of plants that have been dissolved in water using special technology. It acts as a deodorant and purifier for everyday needs. BIO DM suppresses mold and decay which allows it to be effectively used as an air-freshener. It was also awarded the gold medal at the 17th International Exhibition of Inventions of Geneva in 1989.

In France, extracts taken from plants were used in medicines and anti-bacterial agents from ancient times. These extracts were blended to prepare a component highly effective at eliminating odor and bacteria. Until now, most air-refreshers simply covered bad odors with an aroma that acted as a camouflage. However, with BIO DM the odor is actually broken apart and eliminated.

The substances that cause bad odors are floating in the air around us at the submicron level. By spraying BIO DM these submicron substances instantaneously coalesce into larger micron-sized particles which then fall to the ground. Moreover, the oxygen ions that result from the reaction between the plant extracts and water break apart the substances causing the bad odors to allow for their speedy elimination.

The qualities of an incense can be detected when it is burning or smoldering.
Using ingredients with a high content of resin or aromatic components when smoldering can affect the amount of smoke and tar.
This product does not employ ingredients traditionally used in the incense stick industry and instead blends ingredients low in resin content and aromatic components.
By using incombustible minerals as part of the ingredients, it is believed that the smoke produced does not contain much resin or tar.

Incenses in the past used to contain 20~30% adhesive compounds.
These adhesive agents are one of the reasons the pure aroma of fragrances are destroyed when the incense is burnt.
In order to limit the odor of these adhesive agents, a 20~30% mixture of traditional Chinese herbs is often used, but this also can create a distracting smell.
Adhesive compounds in Art Lab.’s incenses are kept at just 5%. Thus, the ones we use are intended for food products, they have almost no effect on the aroma of the fragrance.
Furthermore, when blending the fragrances, we do not use petroleum-based components, which cause tar, so you can enjoy the perfume’s natural fragrance. 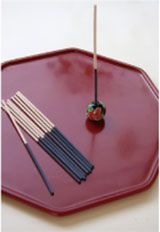 The Planning and Birth of Utsuroi-ko Incense

The incense that resulted from such improvements and alterations to ingredients helped give birth to our Utsuroi-ko incense. For this incense, we do not use the traditional method of adding fragrances to the incense while molding it, but instead use a 2-part process that applies the fragrance after the incense has been cast.
Since the surface of the incense is porous, the fragrance can easily penetrate the core, providing more than 3-times the amount of fragrance found in traditional incenses. By soaking the incenses in two different types of fragrances half at a time, we succeeded in creating an incense that allows you first to experience aroma A, then a mixture of aromas A+B and finally finishies with aroma B. Aiming to reflect the changing seasons of Kyoto, we predicted the blend that would result from combining aromas A and B. After creating our desired fragrance, we repeated the laborious process of breaking down aromas A and B until we had created 12 different types of Utsuroi-ko incenses.